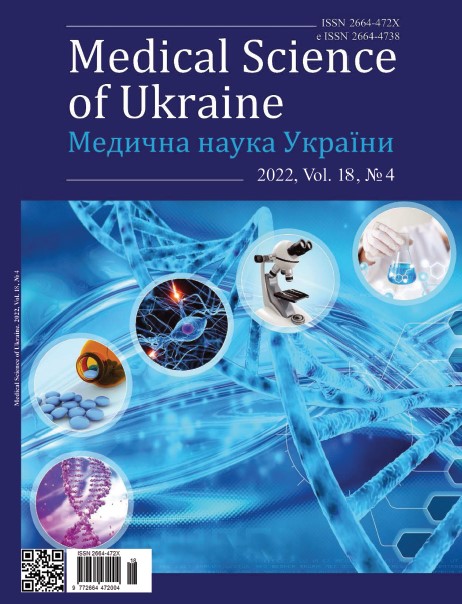 Relevance. The large number of wounded in modern military conflicts “encourages” and in some cases requires revision and modernization of previous views, concepts and theories of medical care providing to wounded during military operations. The optimal concept for the surgical care provision transformation to wounded with soft tissues gunshot defects is to change the approach and tactics of viewpoint at soft tissues gunshot defects which should tactically and strategically rely on the principles of reconstructive and restorative surgery which corresponds to NATO countries medical protocols.

Objective: to establish the characteristics of the main and additional diagnostic and treatment schemes the content and volume of surgical care for the injured with soft tissues gunshot defects in the conditions of the III and IV levels of medical care providing in the Military Medical Forces of the Ukrainian Armed Forces.

Materials and methods. 342 wounded were included into the study who were treated in the health care system of the Ukrainian Armed Forces from December 2016 to December 2021. 128 of them consisted the main group and 214 - the comparison group.

The third level of medical support was formed and implemented at the operational level at the expense of surgical departments (clinics) of the Military Medical Clinical Centers of the Northern and Eastern Regions, medical institutions of the Ministry of Health of Ukraine and provided for the provision of specialized medical assistance: diagnosis of injuries and necessary inpatient treatment of the wounded with the aim of their fastest return to military units or referral to the fourth level of medical care.

Results. In general, the experience of the Ukrainian Armed Forces medical support during ATO/JFO showed the high efficiency of specialized surgical treatment of the injured with soft tissues gunshot defects in highly specialized departments of treatment and prevention institutions of the IV level using the most effective diagnostic and treatment technologies. We believe that a similar transformation of medical care provision to the wounded took place due to the fact that, in accordance with the proposed and implemented differentiated surgical tactics with a multimodal approach to wounded with soft tissues gunshot defects reconstruction, new staffs of medical companies of brigades and battalion medical posts were proposed and approved during the JFO, the positions of riflemen were introduced paramedics of departments, combat medics of platoons, senior combat medics of companies.

Taking into account the results obtained it should be noted that the system of medical care providing for the transition to a higher level should include:

- the possibility of qualified medical assistance providing from the II level aimed at recovery, stabilization, and in some cases saving the life of a wounded serviceman on the basis of "damage control resuscitation" which meets the NATO protocols requirements;

- available in terms of time and operational situation, the use of air evacuation for the purpose of wounded with gunshot defects of soft tissues, which demonstrates an increase in the rate of preservation of 20-25% of the volume of the damaged anatomical structure;

- use of modern additional technologies in the form of dynamic digital thermography and audio doppler.

Conclusions. The listed positions obtained during the surgical care implementation at the III-IV levels of medical care have demonstrated that the use of additional alternative portable technologies meets the requirements and conditions of a rapidly changing theater of operations in a modern military conflict.

Badyuk MI. [On improving the system of medical support for troops in armed conflicts]. Medical support of an anti-terrorist operation scientific-practical and medical-social aspects: a collection of scientific works. K: SU “Priorities”, 2016: 265-267 [In Ukrainian].

Kazmirchuk AP, Galushka AM, Rychka OV. [Analysis of sanitary losses during the anti-terrorist operation in the east of Ukraine]. Problems of military health care: Collection of scientific works of the UVMA. 2017; 42(1): 29-44 [In Ukrainian].

Khomenko IP, Korol SO, Matviychuk BV, Chelishvili AL, Sichinava RM. [Modern treatment and evacuation aspects of the traumatological assistance provided to the wounded with the tibial gun shot injuries at the level of medical maintenance]. World of medicine and biology = Svit medytsyny ta biolohiy. 2019; 3(69):168-173 [In Ukrainian].

Khomenko I.P. [Instruction on medical support of the Armed Forces of Ukraine for a special period]. К.: “Lyudmila Publishing House”, 2019: 192 [In Ukrainian].